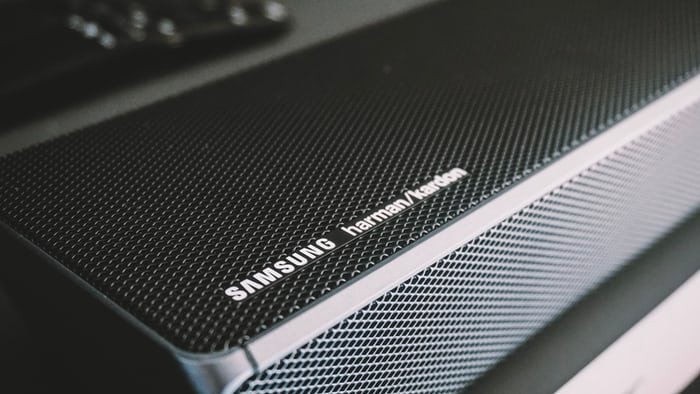 Most ultramodern Samsung television provides high definition quality and crisp images. However, they are built with tiny internal speakers that won’t give you the desired sound output you want. While this may seem like an unfortunate piece of information, makers of Samsung electronics have provided soundbars that will provide you with that quality audio output that you so desire.

So, if you are one of the proud owners of any of the latest Samsung televisions, you are most likely going to need a soundbar to project top-notch surrounding sound. Get Samsung Soundbar. It promises to give you the best result. Now you have just gotten a Samsung Soundbar, and you will like to connect it to your television. There are several methods to connect a soundbar to a tv.

However, some television users prefer to use the Auxiliary method. This method is considered old by many because there are many other sophisticated methods of connection. Regardless of its fashionable acceptance, it remains straightforward to connect soundbars to a television.

How to Connect Soundbar to Television Using Aux

The exciting thing is that most Samsung Soundbar comes with an auxiliary cable in the pack. However, if your soundbar doesn’t have a cable, it doesn’t cost much to get one. Although Aux cable transmits raw sound using analog means. However, this process works just fine when you follow the proper procedures to connect the cable to the soundbar.

If you don’t know how to connect a soundbar to your television using Aux, follow these simple steps:

Connect the Samsung Soundbar to the power source and switch it on.

Once you have connected the Aux cable to your Samsung Soundbar and television, you will need to change the audio mode on the soundbar to Aux mode.
Click on the Mode button on the soundbar remote, select Aux mode.

Other Ways To Connect Samsung Soundbar To Television

Besides using an Auxiliary wire to connect your Samsung Soundbar to television, there are other means of doing that. They include:

You can use any of these methods to connect your Samsung soundbar to television.

Which Method of Connection is The Best?

All these stated methods, using the Optical Cable is the best one. It offers you the quality sound that you desire. While Bluetooth and HDMI require that the distance between the soundbar and television is not too much, Optical Cable covers more distance.

With an Optical Cable, you will still get top-notch sound even when the distance between the television and soundbar is quite much. Unfortunately, this is not obtainable when you use the Auxiliary cable for connection.

Most Aux cables are not too long. It is expected that the soundbar and television are just a few meters apart, so the cable can only cover the distance between the tv and soundbar.

Also, you might begin to have interference when the Aux cable is waxing old. This is because the cable is made with copper, which produces electromagnetic waves.

The Optical cable is made with plastic and glass, which can not produce any electromagnetic wave. With this, you are sure to have the perfect sound output with your Samsung Soundbar. This is not to discourage you from using any of these methods for connecting your soundbar to television, as we respect your choice and preference.

If you would like to use the Aux cable to connect your Samsung Soundbar to the television, let this review be your guide.

6 Ways to Sell Your TV Fast