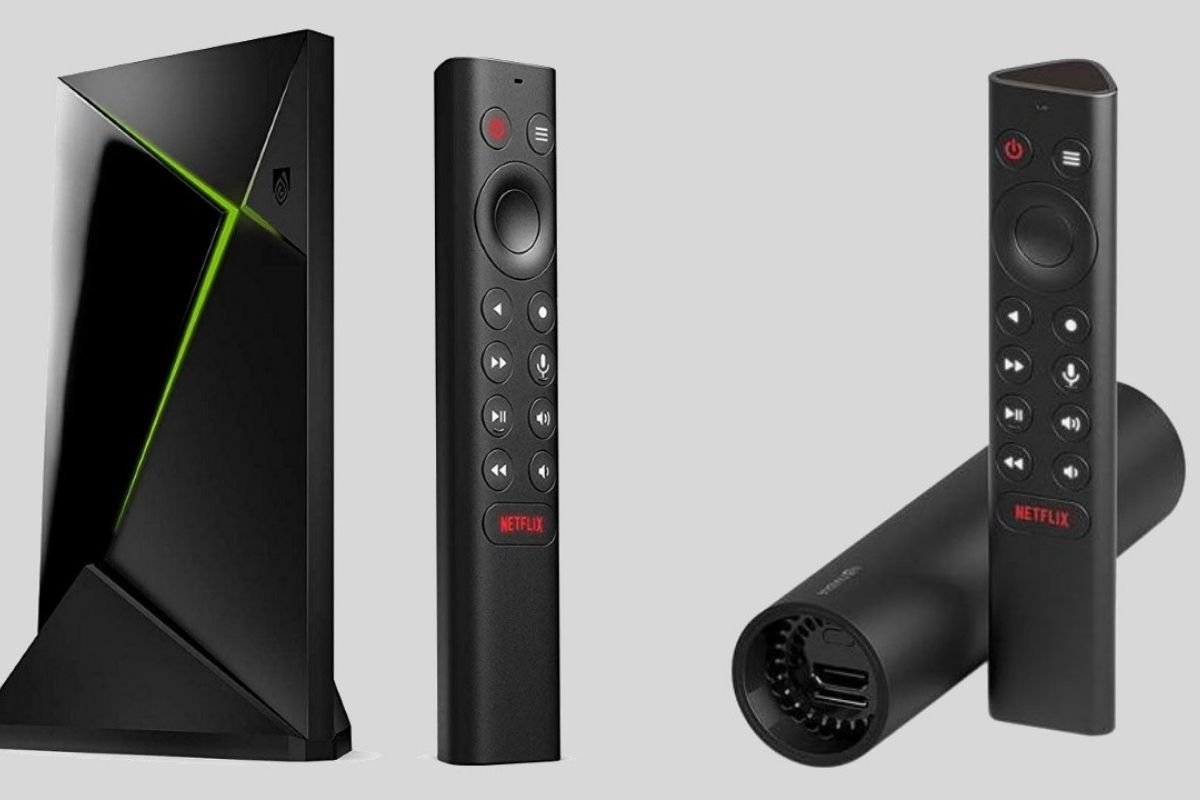 The Nvidia Shield TV Pro is the successor to the original Shield TV. The new Shield TV Pro is still arguably the best streaming device and games console available. If you love watching movies in 4k or playing high-spec games, this Android-powered set-top box will appeal to you.

This Nvidia ultimate streaming device, which combines all of your favorite streaming services into one sleek, powerful package, is a fantastic box to own. Keep reading to see why we think the features, processing power (and more) make this streaming box from Nvidia a must-have.

Without further ado, let’s get started.

The design of the Nvidia Shield TV Pro is not much different from its predecessor. It’s still a square box, powered by Android TV with an Nvidia Tegra processor.

The new Nvidia Shield Pro Box has an Ethernet port for those who want the most stable connection possible (although built-in Wi-Fi is also included).

The ports include two USB-A, one for microphone and another for storage. It also has a full-sized HDMI out to connect it directly to your TV or receiver – plus a SPDIF port too.

It comes with a built-in Google Assistant, which means you can control the device using only voice commands. This is perfect if you want to control the content on your TV without having to press a button.

This Nvidia streaming box is a powerful machine with an advanced cooling system, making it perfect for heavy gaming and movie watching.

It’s also a streaming device, like its predecessor, which means it can run Android TV apps and games as well as stream content from Netflix or other sources on your home network.

This Nvidia set-top box also comes with Google Assistant built-in, which is impressive considering it’s a streaming device and not an Android TV smart display.

Now, let’s talk about the performance of the Nvidia Shield Pro. This is a powerful streaming box with some impressive hardware specs, which you’ll want to know about if you’re considering making it your next streaming device.

For a start, the Shield Pro retains 3GB of RAM and a 16GB hard drive for storage. Considering that some other Shield models have more impressive storage and RAM capacities, this is a bit of a letdown. Although the Shield Pro has support for up to 128GB of external storage via USB, so you can upgrade the memory with something like an OTG drive.

The Shield Pro also supports HDR content, giving you better clarity and color depth. This means that if your TV supports the standard (or the HDR-enabled Xbox One S console), you can watch films and shows in better quality.

The Nvidia Shield Pro also supports Dolby Atmos for those who want to experience their entertainment with a little more depth. The Nvidia Pro can also playback Dolby vision content, a high-end format that uses frame-by-frame metadata to adjust brightness and contrast levels. It also supports DTS X, which means you’ll be able to get a more immersive soundscape from whatever you’re watching.

Considering that this is a games console, too, the Nvidia Shield Pro offers impressive performance. You’ll be able to play games in incredible detail thanks to the Tegra X-series processor in the box. This model comes with a processor upgrade to the Tegra X1+ processor.

The processor is an improvement on the Tegra X1 that came with the initial Nvidia Shield TV. This upgrade delivers a 25% performance boost for the latest Nvidia product.

The Nvidia Shield TV Pro comes with a redesigned remote control that has been thoughtfully improved. It’s now structured like a prism, rather than being flat, and contains dedicated playback controls as well as a selection wheel. There’s also a special Netflix button, a mic-on button, and a ‘Quick Menu’ button that you can customize in the UI to go right to any function.

If you utilize the mostly-inessential Nvidia Shield TV mobile app, the remote now doubles as an IR blaster for controlling your TV, and it’ll also beep if you lose it.

We’ve talked about the look and design of this device, as well as some features. But let’s discuss the user interface too.

Of course, the Shield TV Pro runs Android TV. This means that you’ll be able to download apps from Google Play and other sources on your home network. It also runs on Android Oreo, which means you get one of the most recent updates to Google’s operating system.

This is great for those who want access to all the latest apps and games without worrying about whether their device will support them or not.

The Nvidia Shield TV Pro has an impressive user interface thanks to a tech called “HDR to SDR” conversion. This means that you get better image quality and details when watching standard dynamic range (SDR) content on an HDR TV.

And, since this is Android TV we’re talking about, it’s also possible to sideload many apps or games from other sources which aren’t available through Google Play.

Google Assistant also features many handy search functions, whether you want to look up the weather forecast or find specific movies across all of your streaming applications.

The Nvidia Shield TV Pro, and indeed any Android TV device in general, has built-in Chromecast support, which means that if you can’t locate the app you’re looking for, you can cast content from your phone or tablet to the box. As a result, you may use the Nvidia Shield TV Pro with a variety of audio apps (such as your favorite podcast player) in addition to the video apps that come pre-installed.

While the Nvidia Shield Pro is one of the best Android TV options, it also has some best streaming app support. You’ll be able to access apps like Hulu, Netflix, and DirecTV Now, and new tools like YouTube TV.

You can also use some of your gaming controller accessories with open Bluetooth support. This means that you won’t need to purchase any online subscription separately.

The Nvidia Shield TV Pro can also download games remotely, so if you’re on the road and want something special to play, you can buy it then and there. You’ll need enough bandwidth for that particular game or application.

Another feature worth highlighting is GameStream support: if you have a Windows PC with a suitable Nvidia GPU in your home, you can effortlessly stream content from it to your Nvidia Shield TV Pro. This works fine as long as you have a strong Wi-Fi signal throughout your house.

The Nvidia Shield TV Pro continues the trend of great Nvidia Shield boxes. It’s a fantastic kit for anyone interested in getting a media box under their television, especially if you’re going to use the extra features like Plex media server support and the ability to plug in external USB storage (and input peripherals) on the back.

The most remarkable aspect of the Nvidia Shield TV Pro experience is the gaming — you can play Android TV-approved games. Still, there’s also the GeForce Now streaming service, which is constantly improving.

It’s not a perfect package, though: there’s no HDMI cable provided, and no controller is included (present in older versions of this device). We aren’t entirely impressed with the box’s design, and this is something Nvidia may consider with the future upgrade. Other restrictions include the requirement for a fast broadband connection to use GeForce Now.

On practically every level, the more direct, more refined experience Shield TV Pro offers is superb, and it doesn’t stray too far from what we already liked about this technology.

The new console also ticks a lot of boxes for its pricing. This is, without a doubt, the box for you if you want a dead basic streaming box with some fun gaming thrown in now and then. And if you’ve been holding out for a new Shield TV Pro to replace your old one, this is a must-have.

Is the Nvidia Shield TV Pro difficult to set up?

No, not at all. You can get this device on your TV within a few minutes.

Is the Nvidia Shield TV Pro easy to use?

Absolutely, yes: it’s intuitive and straightforward, and you’ll get used to it quickly after a short time with the device.

Does the Nvidia Shield TV Pro have parental control features?

Yes, you can set a PIN code to protect your kids from accessing certain areas of the interface and apps.

What about 4K and HDR support?

Cost of Renting a TV for a Day

5 Fixes for Fire Stick No Signal