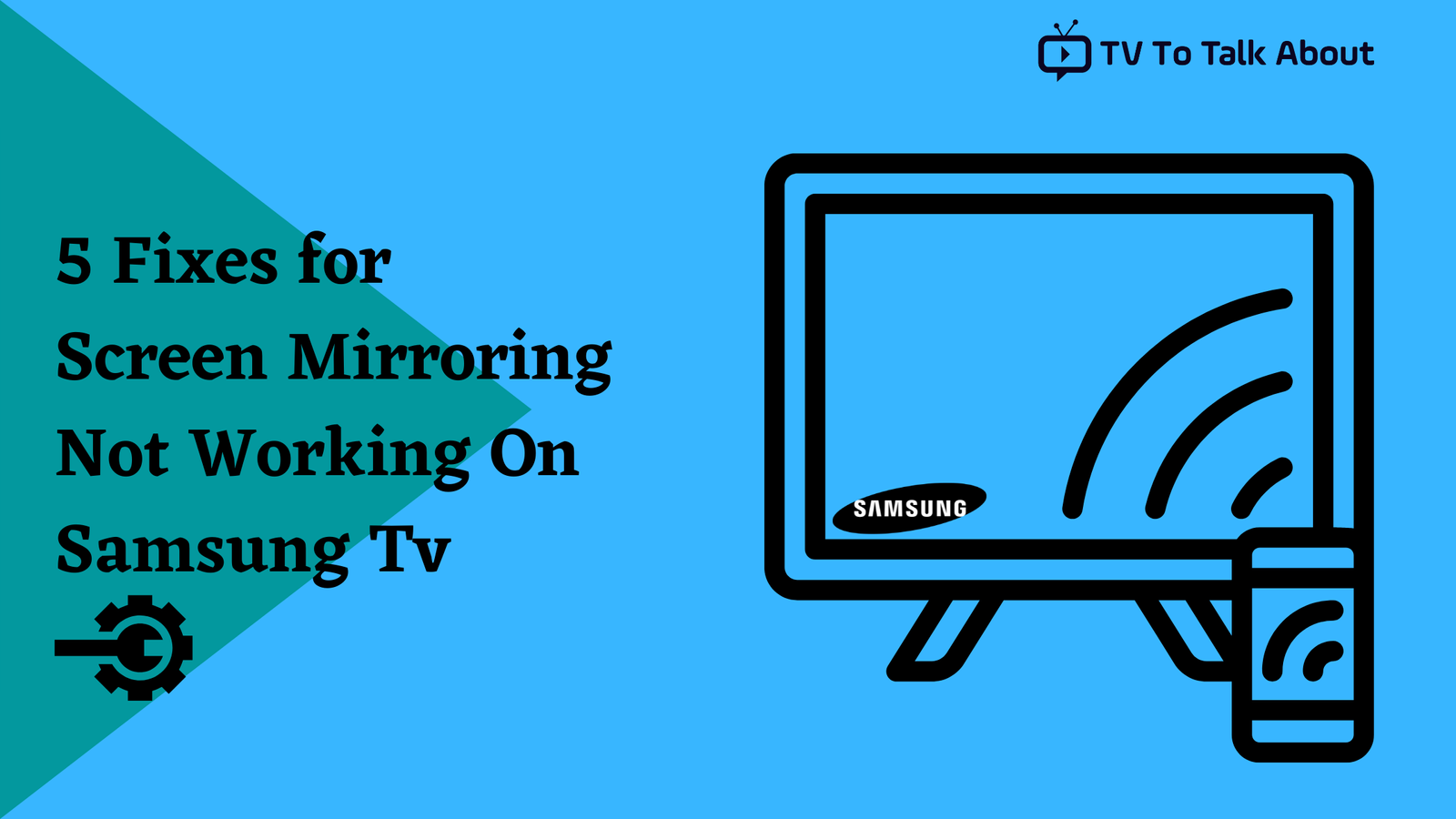 However, there are situations when screen mirroring does not operate properly, such as when the device’s name does not appear on the smartphone and when it disconnects repeatedly. So, in this article, we’ll discuss how to fix the problem of “Screen Mirroring not working on my Samsung TV.”

Screen mirroring not working can be caused by various factors related to the mobile device and the Samsung television. As a result, we’ll break down each cause in detail so you can understand and figure out why screencasting isn’t working on your Samsung TV.

Here are a few known causes;

How to Fix Screen Mirroring Not Working On Samsung Tv

This is a known problem with several Samsung TVs, so connect two or three times more. If your phone still doesn’t connect to the TV, try rebooting your Samsung TV. Because restarting has been shown to resolve a large number of issues like this. As a result, it is advised you reset your television at least once.

Confirm if your “Screen mirroring not working on my Samsung TV” issue has been resolved. Congratulations if the problem has been solved; otherwise, proceed to the next step.

The screen mirroring issue can be caused by both smartphones and Samsung TVs. As a result, the error cannot be attributed solely to the Samsung TV. So, you should attempt restarting your phone at least once.

Check to see if your problem has been resolved after resuming.

If the problem continues after you’ve tried the steps above, likely, your smartphone’s default casting/screen mirroring capability isn’t working correctly. Many people have used third-party programs like “Lets-view” and “Apowermirror” to solve the “Screen mirroring not working on my Samsung TV” problem.

If the issue does not stop after trying all of the methods, you should try casting/screen mirroring with any other smartphone. After that, you’ll be able to tell whether your smartphone or your Samsung TV caused the issue.

Samsung TV is not showing up as an option

There are certainly a few things more frustrating than turning on your Samsung TV, knowing that the power is on, but still seeing a blank screen when attempting to activate AirPlay.

This can leave Samsung TV users frantically trying to figure out what’s wrong but remaining in the dark despite their efforts. If your Samsung TV’s AirPlay isn’t working and you’re seeing a black screen, check to see if your TV has the most recent update since this can cause problems with apps.

To update your Samsung TV

Turn your Samsung TV off and on again if there is no update available or if the update did not solve the problem of your AirPlay displaying a black screen. Go to ‘Settings’ > ‘General’ > ‘AirPlay Settings’ > then disable the ‘Require Code’ option if it was previously turned on. This should hopefully allow you to re-enable AirPlay and have it operating properly.

AirPlay is a function that allows users to connect their TV to other smart devices, allowing them to transfer content from other devices to their TV screen rapidly.

After you’ve connected your devices, your Samsung TV should create a code that you’ll need to enter into the device you’re trying to mirror to finalize the connection. What should you do if your Samsung TV refuses to generate an AirPlay Code?

One of the most common reasons for your Samsung TV not generating an AirPlay code is that you haven’t turned on AirPlay on your TV. To do so, go to your TV’s ‘Settings’ menu, pick ‘General,’ then ‘AirPlay Settings,’ and then select the option to ‘On’ the AirPlay feature.

If you’ve already enabled this function and are still having difficulties getting AirPlay to create a code, your TV may require a firmware upgrade.

You may not be experiencing difficulty with your AirPlay feature operating, but once you are within AirPlay and have the screen mirrored without trouble, what do you do when it repeatedly disconnects? This is an aggravating situation as continual disconnection is highly interruptive. However, when it comes to AirPlay, this does not have to be your new reality.

One of the first things you should check if your Samsung TV AirPlay keeps disconnecting is your WiFi connection, as this is often the cause of random disconnections. To check the network signal strength on your TV, go to ‘Settings’ > ‘General’ > ‘Network’ > ‘Open Network Settings’ > ‘Wireless’ and count the number of bars that appear. Your connection may be unstable if there are only one or two bars.

If this is the case, you should consider moving the router closer to the TV, as walls between the router and the TV can disrupt the WiFi signal and cause disconnection.

After confirming the signal strength, consider rebooting your router if you still have problems. To do so, unplug the router from the wall for 60 seconds, but make sure to check your router’s user manual for specific instructions.

How to Connect AirPods to PS5

Is OLED TV Really Worth It?