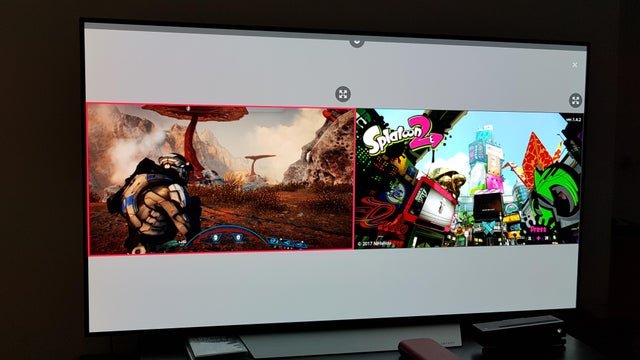 The split-screen feature allows you to see two things on your TV simultaneously. You may view videos from many sources on the large left screen, such as an app, Blu-ray player, or game console, while also mirroring your phone on the smaller screen. Split-screen gives you many options for splitting screens and watching much content simultaneously.

How to split-screen on a Smart TV

You must use the Multi-Screen feature to divide the screen on a smart TV. To begin using Multi-Screen, follow the steps:

NOTE: Not all TVs have the split-screen feature. Ensure yours does or this wouldn’t be of any use to you.

• Select MENU from the drop-down menu.

Note: While watching TV, you can use this feature to browse the web, use apps, and use other services. This solution necessitates the use of the internet.

How to split LG TV into two channels

To split your LG TV into two channels, turn on the “Dual Window Function.”

Follow these steps to enable the Dual Window feature:

• Touch and hold the Recent Apps Key (in the Touch Keys bar) on the Home screen > Settings > Dual Window.

• Toggle it On or Off by tapping the Dual Window switch (at the top of the screen).

How to split-screen on Sony Smart TV

To split the screen on a Sony smart TV, turn on the “Twin Picture Function.” To do so, follow these steps:

• Select the HDMI input that links to the TV.
It’s worth noting that the TV won’t go into Twin Picture mode until an HDMI input is connected.

• Go to the ACTION MENU and choose Twin Picture.

• Select Single Picture from the ACTION MENU to exit the Twin Picture mode.

How to use split screen on TCL TV

• Press the Menu key in the lower right corner of the screen to bring up a list of recently used apps.

• To use split-screen, press and drag one of the applications to the top (only for apps that support split-screen).

• Press the Menu key to return to the last app you used.

• Touch to close the split-screen mode.

Can I watch two things at once on a TV?

How do I split my TV into 2 screens?

Display the source of a device connected through HDMI on one screen, then the TV source on the other (Built-in Tuner). The input screen of the selected connected device is displayed. Select [Twin Picture] from the ACTION MENU button.

How do I watch two channels at once on a Smart TV?

Multi-View can be accessed by pressing the Home button on the remote and then selecting Multi View. To get started, turn on the feature and look over the options. Select the content that will display on the screen’s left side.

Can I split a TV monitor into two screens?

You can tap the right or left arrow key while holding down the Windows key. Your active window will shift to the side due to this action. The rest of the windows will be on the opposite side of the screen. Select one, and it will become the other half of the split-screen.