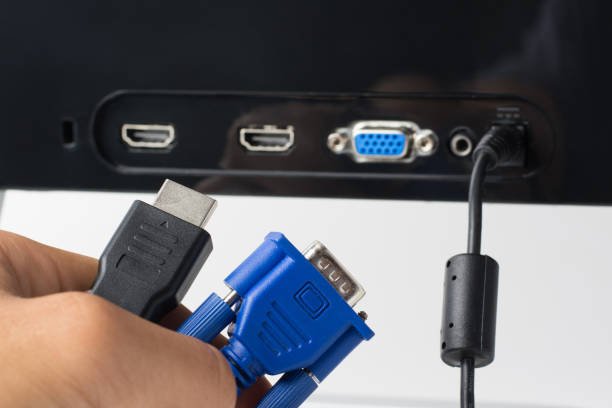 VESA (Video Electronics Standards Association) established the DisplayPort (DP) in 2006 as a replacement for VGA and DVI connectors, which were previously used to connect PCs to displays.

Do TVs have DisplayPort?

DisplayPort offers a reduced input lag and a refresh rate comparable to gaming TVs. They include a remote control for changing the input signal. Still, they frequently lack an accurate TV tuner, necessitating the use of a streaming player such as Roku or Nvidia Shield.

DisplayPort can convey audio signals and video if the source device provides the signals. The audio signal is not accessible if the display device does not have a speaker system or an output to an external audio system.

With an adapter or adapter cable, you may use a DisplayPort on specific devices with other types of connections, such as VGA, DVI, and HDMI.

In recent years, DisplayPort has made more significant strides in terms of bandwidth. DisplayPort 2.0 now has a data transfer rate of up to 80 Gbps, whereas DisplayPort 1.4 only has up to 32.4 Gbps.

If you’re connecting multiple monitors to the same computer or laptop, a DisplayPort connection is a way to go; this allows you to connect numerous displays using a DisplayPort splitter or employ “daisy-chaining.”

There are six different versions of the DisplayPort standard; backward compatibility exists between newer and older versions. DisplayPort 2.0, launched in 2019, is the most recent standard. However, the most prevalent standard is DisplayPort 1.4a, which is now present in many computer monitors.

This type supports resolutions up to 16K at 144Hz with no compression or two 4K monitors at 144Hz. It also has 3D sync, G-Sync, and FreeSync capabilities.

It’s worth noting that while DP 2.0 and HDMI 2.1 are still new standards, there aren’t many TVs or computer monitors that support all of their functions just yet. Both are, however, backward compatible; thus, you may use an HDMI 2.1 cable with a TV that only supports HDMI 2.0.

Do TVs with DisplayPort support 4K at 144Hz?

Yes, most TVs with DisplayPort use the 1.4 protocol, which is capable of 4K 144Hz using DSC compression or downsampling to 4:2:2 Chroma subsampling.

Why is DisplayPort not popular with TVs?

Because most media devices in the living room already have an HDMI connector, the Display port is not often used with TVs. Furthermore, the new HDMI 2.1 protocol supports 10-bit HDR at 4K with a 144Hz frame rate, making DisplayPort 1.4 obsolete for TVs.

Another reason is that the HDMI standard was created by a group of TV manufacturers such as Sony, Panasonic, and Philips. As a result, all their TVs and devices use the HDMI port.

Can I connect my video card to DisplayPort TV?

You can connect to a DisplayPort capable TV with a DP-compatible video card. The port’s version is the only variable. If you have 1.2, you’ll be stuck with a 4K resolution and a 75Hz refresh rate. When using the DisplayPort 1.4 version, you’ll get 4K 120Hz by default and 144Hz when overclocked.

Do TVs with DisplayPorts have less lag?

Yes, because TVs with DisplayPorts use the same display technology as monitors, they have reduced input lag. For a better movie experience, TVs, on the other hand, do a lot more visual processing. On the other hand, TVs have become much more responsive with the launch of newer generations of consoles.

Adjust Netflix Playback Speed on Your TV: A Complete Guide