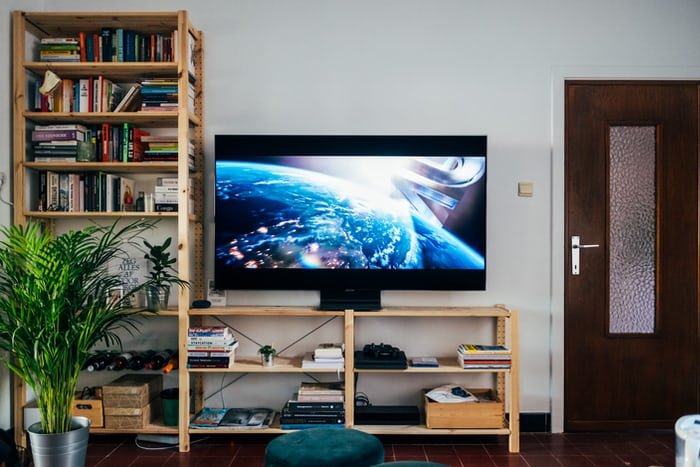 Only a few people pay close attention to where their small television is placed in their living room. After all, being viewable is all that matters. The position of television has never been a thing of concern.

Still, a good television experience at home depends largely on how it’s positioned without disrupting the existing house furniture and paintings.

Where To Put a TV in a Small Living Room

If you are thinking of what places to place a small TV in your living room, the objective of this article is to help you with tips on places without disrupting the general beauty of the living space.

Mount The TV on the wall

This is by far the most common way to mount a television, whether big or small. You could get creative with this method by ensuring that the TV is blended with the wall. To mount your tv on the wall, you’ll need a TV wall Mount. You can easily adjust this to be flat against the wall or titled out.

We recommend the Amazon Basics Full Motion Articulating TV Wall Mount. The great thing about this tv mount is that it can turn in all directions!

You can paint the portion of the wall where the television will be mounted. Paint it black or velvet depending on your preference. You can even use 3D wallpapers like this Modern 3D Abstract Blue Marble Wallpaper.

To make it more unique, try to use a floating shelf under the area where the television is mounted.

Mount TV in a Corner

If you are dealing with a small space, there are still lots of options on where to place your small television. You can mount your television in the corner of the wall.

You can achieve this using a corner tv stand like the Walker Edison Furniture AZQ44CCRES Modern Farmhouse Wood Corner Universal Stand for TVs up to 48″.

You should make use of a moveable TV mount. It allows you to move your TV closer when using it and return it to its original position after use.

You should not have a storage problem if your television is small. However, if you have a small living room, you might need to work on space management when mounting your television.

That lovely bookshelf should not just be for storing books. You can make good use of it to mount your television.

You can just build a sliding shelf and have the television mounted in the middle. This is a creative way of storing the television. It helps with optimum space management.

Mount TV over your fireplace

Mount on the gallery wall

It will interest you to know that no law states the television has to be at the center of the living room. Positioning the television is based on the preference of the user and functionality.

You can get creative by positioning the television between the gallery wall. Best to avoid tv stands, if your space is small. Except you’re using a small tv stand.

A couple of aesthetic frames will serve the function of a shelf and help frame the television.

Tuck The Television To The Side

If you use your living room for more than watching the television, you should not allow this piece of technology to rob you of the space you need. The television can be tucked into one side of the living room, giving you more space in the room.

With this, you can host friends in your living room without worrying about them bumping into your tv. The downside of this is that you will have to move one or two cushions out of the way whenever you want to watch the television.

The shelf is a storage device that would ensure the television wires are not seen and other entertainment components are appropriately kept.