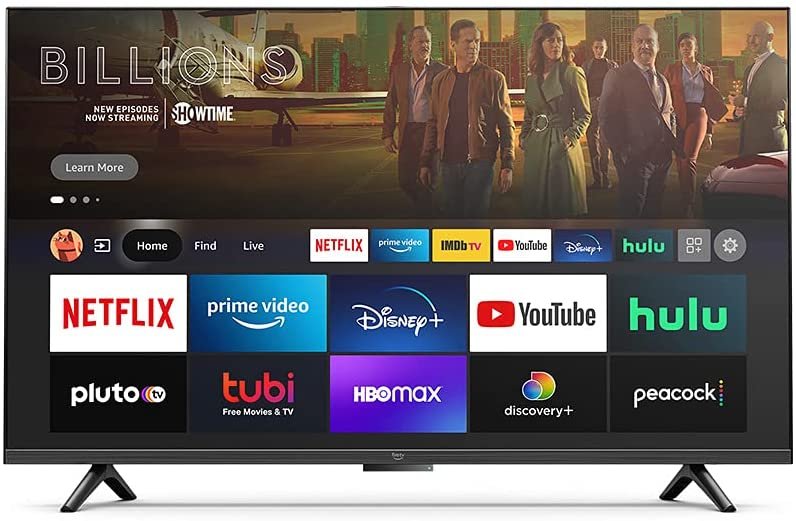 Amazon is making a foray into the world of branded televisions with its Fire TV 4-Series and Fire TV Omni Series.

The new TVs are Amazon’s first attempt to take on other big brands like Samsung, LG, and Sony in the high-end smart TV segment.

With Alexa support built right in, these TVs feature voice control for streaming content from Prime Video or Netflix without using any additional hardware such as a remote control or game controller.

According to Amazon, the TVs will be available for order from the 4th of October on Amazon and Best Buy.

The TVs come in different screen sizes, five for the Omni series and three for the 4-series. The most expensive being the 75-inch Omni series, priced at $1,099.99.

All the TVs in each model come with an LED panel and has a 4K resolution. They also support the HDR10 and HLG high dynamic range. If you want a TV that includes support for Dolby Vision HDR, you would have to buy the bigger screen sizes in the Omni series – 65 and 75 inches.

The new TVs offer several features that make them stand out in the crowded smart TV market. Let’s begin with the Omni Series.

Whether you’re looking for program recommendations or want to access a specific app, the Fire TV Omni can be controlled totally with your voice, without the use of a remote.

The fact that Alexa can respond to natural language is maybe the most fascinating aspect of these TVs.

You may ask Alexa to start playing music, check the weather, control your smart home, and view smart home cams on your display while watching TV, among other things.

Alexa controls on the Fire TV Omni Series also work in smart homes. You can, for example, monitor any of your Alexa-compatible smart cameras in picture-in-picture mode while watching TV or see who’s at your door right from your TV.

You can also control other compatible smart devices like lights and speakers, as well as create shortcuts.

Just like Amazon’s Echo smart speakers, you can chat to the TV from across the room. You can turn off the mic by pressing the microphone switch at the bottom of the screen. You can also use a webcam for video calls.

Need recommendations for a movie to watch? Ask Alexa. Need something to play on Netflix randomly? Tell Alexa just that. These TVs are there to help you enjoy your TV time without having to stress yourself.

You don’t have to look at your phone to get details of anything or reach for the remote control. If you can say it, Alexa can do it!

In terms of technical specifications, all Omni Series TVs have a 4K resolution and support HDR10, HLG, and Dolby Digital Plus. These are fancy words that mean these sets support many of the latest colors and audio standards.

For audio, the Fire TV Omni Series also supports Alexa Home Theater, allowing you to connect your TV to Alexa-enabled speakers like the Amazon Echo or Amazon Echo Studio for a more immersive sound experience.

Because the Amazon Fire TV 4-Series TVs have thicker bezels around the borders than the Omni TVs, they won’t seem as modern, and you won’t be able to add a webcam for video calls.

Alexa is compatible with the 4-Series TVs, but only when the Alexa button on the voice remote is pressed.

You won’t be able to speak to your TV from across the room as you can with the Omni series, but you can Alexa to play specific movies, TV episodes, and more, and ask it questions like sports scores and the weather, just like you can with any Fire TV device.

While the 4-Series TVs support high dynamic range standards such as HLG and HDR10 for better clarity in darker and brighter settings, only the Omni Series TVs feature Dolby Vision.

Our Take on the TVs

With the Omni Series, you get more control over your TV time, thanks to Alexa’s advanced controls and capabilities of these TVs.

With the Fire TV Series, however, you can still use most features of other Alexa devices like smart speakers or even video doorbells for a better experience in home automation without spending as much as you would for the Omni Series.

That said, you can get both! That’s of course if you have the budget and the need for them. And that’s what Amazon wants its customers to do.

Either way, it is safe to say that these will be two of the most well-received TV releases in history, and we look forward to seeing more from Amazon (and other top brands) in the future.

The new Amazon Fire TV Stick 4K Max boosts the power of the previous Ultra HD Fire Stick for better entertainment. It also has a new bonus for smart homes that will improve their connectivity.

The catch here is the performance and power, which is why the Stick’s name is “Max.” Also, the remote has been altered in ways that some will appreciate and others will not.

With 2GB of RAM and a quad-core 1.8GHz processor, the navigation should be smoother, and apps should run faster. This device, according to Amazon, is 40% more powerful than its predecessor, the Fire TV Stick 4K.

When streaming in 4K or cloud gaming with Amazon’s Luna, Wi-Fi 6 is included to provide a better experience for customers with several devices connected.

It has a blue Alexa button and dedicated app shortcuts buttons for Prime Video, Netflix, Disney Plus, and Hulu, and it looks similar to the standard Fire TV remote.

Amazon says that the Fire TV Stick is the best-selling streaming device in the U.S and it’s hoping to maintain that momentum with this new edition, which comes in under $60.

Our Verdict on the New Fire TV Stick 4K Max

The new Fire TV Stick 4K Max, based on the specifications published by Amazon, appears to be an extremely capable streaming stick at $55.

This is especially true if you’re looking for a streaming device and don’t already own a former edition of the Fire TV Stick.

However, how it performs compared to the existing Fire TV Stick 4K remains to be seen. Although the enhanced technology should allow for faster navigation, the general capabilities of video playback remain unchanged.

The Fire TV Stick 4K Max could be a helpful upgrade if you want faster navigation, but you should consider waiting until reviews are available before making the switch.

The new Amazon Fire TVs and the Fire TV Stick 4K Max are here, and everyone is talking about them. Like any upgrade or a new product from a top brand, you can expect top-class functionality and features.

We are especially pleased with the Omni Series and all the amazing things it can do. If you have the budget, any of those TVs in the lineup should make a great buy.